A more comprehensive habitable zone for finding life on other planets

The habitable zone is defined as the orbital region around a star or multiple stars where standing bodies of liquid water could exist on the surface of a rocky planet. The habitable zone concept is a tool that guides both space- and Earth-based telescopic surveys in searching for the exoplanets most likely to host life, assuming liquid water is required for biology. Atmospheric bioindicators, such as O2 or CH4, can potentially be detected on planets with standing bodies of liquid water. Detecting atmospheric signals indicative of life on dry worlds with only small amounts of seasonal surface water (e.g., Mars) may be impossible because a planet may not be habitable if water is not sufficiently abundant. The habitable zone concept also excludes exoplanetary equivalents of our solar system's icy moons Europa and Enceladus, which could have life within their subsurface oceans, but it would be hidden from view under the thick ice and be undetectable. Therefore, the habitable zone, as defined, might not identify all planets capable of harboring life.

Here, ELSI's Dr. Ramses Ramirez reviews the latest advances in the understanding of planetary habitability, synthesizing them into a more comprehensive habitable zone model that can be used to search for life on other planets. This review of the habitable zone concept summarizes the combined knowledge from a number of fields and is intended to be a primer for researchers and students, and a guide for current and upcoming space missions. 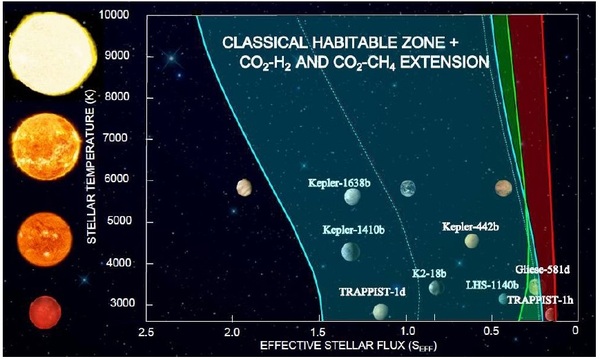 The classical habitable zone (blue) with CO2-CH4 (green) and CO2-H2 (red) outer edge extensions for stars with temperatures between 2,600 and 10,000 K. The effective stellar flux is "1" for Earth orbiting the Sun (Stellar Temperature = 5800 K)