The journal editors of American Mineralogist chose PI George Helffrich and colleagues' paper for one of their July issue highlights.

When the Earth formed from undifferentiated material, a magma ocean developed. From a chemical viewpoint, the magma ocean had a solid base due to the fact that at high pressures, deeply buried material freezes despite being hot. The metallic part of the accreted material melted and separated from the liquid at this liquid-solid boundary. Due to the metal's high density, it collected in the growing planet's center and formed the core. While passing through the liquid silicate, the metal absorbed some of the elements silicon (Si) and oxygen (O) and took them into the core. Much later, after accretion finished, the core began to cool and the Si and O originally added began to crystallizeas the compound SiO₂ (a high-pressure form of quartz). The low-density SiO₂ floats in the core and is even light enough to rise in the lower mantle as100 m to 1 km wide blobs.

Those phenomena were described in previous work. Here PI Helffrich and Director Hirose explore the consequences of the reappearance of SiO₂ made from atoms that were once in the magma ocean, but now are coming out of the core. The temperature of the magma ocean was lower than the planet's center, and the metal preferentially took in lighter isotopes of Si than average in the silicate. Thus when expelled by the core as SiO₂ they would have much a much different Si isotopic signature. In fact, the Si isotope difference is so large that it substantially exceeds the variation in the types of meteorites that are thought to have formed the bulk Earth, chondrites. Hence isotopically light SiO₂, if found at the surface, would prove the existence of a cycle involving the magma ocean -> core-> mantle -> surface. 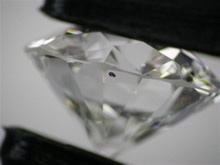 Diamond showing dark inclusion of trapped mineral. Inclusions similar to this may include high-pressure forms of SiO2 that was once incorporated in the Earth's core.

Diamonds brought up by deep (> 150 km) volcanic eruptions often contain rock inclusions engulfed as the diamond formed in the magma. Some of these inclusions are reported to be SiO₂. The researchers propose that a good place to look for evidence of core-hosted Si is by analyzing the inclusions' silicon isotope content to see if it is significantly lighter than carbonaceous chondrites.