Piecing Together the Narrative of Evolution

EON postdoctoral fellow Jennifer Hoyal Cuthill's work looking at fossil records of the Ediacaran to shed light on the evolution of early life in the early Earth's environment.

(Link to the original article) 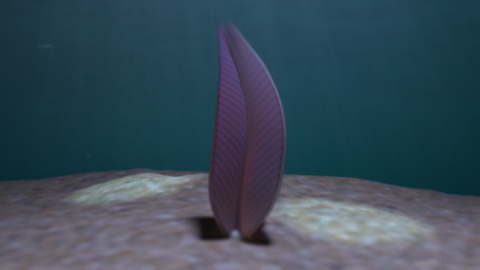 A reconstruction of the frond-like sea creature Stromatoveris psygmoglena, which lived during the Cambrian explosion of life forms on Earth. Newfound fossils of Stromatoveris were compared with Ediacaran fossils, and researchers concluded they were all very early animals and that this animal group survived the mass extinction event that occurred between the Ediacaran and Cambrian periods. (Jennifer Hoyal Cuthill.)

An essential characteristic of life is that it evolves. Whether on Earth or potentially Mars, Europa or distant exoplanets, we can assume that whatever life might be present has the capacity and the need to change.

Evolution is intimately tied to the origin-of-life question, which this column often explores. Having more answers regarding how life might have started on Earth can no doubt help the search for life elsewhere, just as finding life elsewhere could help understand how it started here.

The connection between evolution and exoplanets has an added and essential dimension when it comes to hunting for signatures of distant extraterrestrial life.

Searching for a planet with lots of oxygen and other atmospheric compound in disequilibrium (as on Earth) is certainly a way forward. But it is sobering to realize that those biosignatures would not have been detectable on Earth for most of the time that life has been present. That's because large concentrations of oxygen are a relative newcomer to our planet, product of biological evolution.

With all this in mind, it seems both interesting and useful to look at the work of a researcher studying the fossil record to better understand a particular transition on Earth -- the one from simpler organisms to multicellular creatures that can be considered animals. 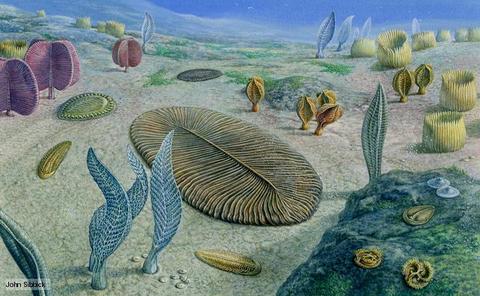 The surprising, large transitional life of the Ediacaran period, which just preceded the Cambrian explosion of complex life. This grouping is termed the Ediacara assemblage, and existed late in the period. (John Sibbick)

The researcher is Jennifer Hoyal Cuthill of the University of Cambridge, who I first met at the Earth-Life Science Institute in Tokyo, a unique place where scientists research the origin of Earth and of life on Earth.

She had been included in a group of twelve two-year fellows recruited from around the world who specialized in fields ranging from the microbiology of extreme environments to the current and past dynamics of the deep Earth and the digital world of chemo informatics. And then there was Hoyal Cuthill, whose field is paleobiology, with a heavy emphasis on evolution.

Now Hoyal Cuthill has published a paper in the journal Paleontology that describes findings in the fossil record that shed light on that transition from less complex organisms like bacteria, algae and fungi to to animals.

Her specialty is the Ediacaran period some 635 to 541 million years ago. This transitional period came after a snowball Earth event and was followed by the Cambrian explosion, when ocean life of all sorts grew and changed at an unprecedented rate. But as she and others have found, the Ediacaran also had large and unique lifeforms, and she is working to make sense of them.

She described her work and findings more specifically as follows:

"When did animals originate? What were the bizarre, early fossils known as the Ediacaran biota?

"We show that both questions are answered by a frond-like sea creature called Stromatoveris psygmoglena known from exceptionally preserved, Cambrian fossils from Chengjiang County, China.

"Originally described from only eight specimens, we examined over 200 new fossils since discovered by researchers from Northwest University (in Xian.) Stromatoveris was compared to earlier Ediacaran fossils in a computer analysis of anatomy and evolutionary relationships.

"This showed that Stromatoveris and seven key members of the Ediacaran biota share detailed anatomical similarities, including multiple, radiating, branched fronds that unite them as a phylum of early animals, originating by the Ediacaran Period and surviving into the early Cambrian."

Fossil of Stromatoveris psygmoglena, turned on its side. New research suggests that Stromatoveris and related Ediacaran lifeforms could be among the earliest creatures that can be described as an animal. Ediacaran fossils have been found from Australia to arctic Siberia, Canada to southern Africa. (Jennifer Hoyal Cuthill) 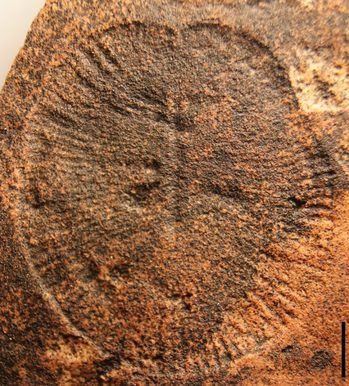 More broadly, Hoyal Cuthill told me that "the story of the origin of life and the evolution of life are so interwoven."

"Looking back as far as we can, we see important patterns emerging from the very start. All things learn. If possible, they add to complexity... And evolution does not result in a complete replacement. When transitions happen -- even big ones - important life patterns continue. And so do some creatures."

This continuity within change is what she has focused on, in the transitional Proterozoic Eon when bacterial and plant life evolved into the more complex ocean animal life of the Cambrian explosion.

She has traveled the world and scoured the fossil record to come up with this conclusion: that creatures that can be called "animals" existed at least as far back as the early days of the Ediacaran, some 630 million years ago, when many macro-fossils quite suddenly appeared following that early epoch of global freezing.

The Ediacaran period gets its name from the Ediacara Hills in Australia, where famous fossils of this age were found. Known also as the Vendian, the Ediacaran was the final stage of Pre-Cambrian time. During this time, large (up to meter-sized) organisms, often shaped like fronds with holdfast discs, lived on thick mats of bacteria which, unlike today, coated the sea floor. The slimy mats acted as a barrier between the water above and the sediments below, preventing oxygen from reaching under the sea floor and making it less habitable.

During this time, large (up to meter-sized) organisms, often shaped like discs or fronds, lived on or in shallow horizontal burrows beneath thick mats of bacteria which, unlike today, coated the sea floor. The slimy mats acted as a barrier between the water above and the sediments below, preventing oxygen from reaching under the sea floor and turning it largely uninhabitable.

And then when the Cambrian explosion occurred beginning some 540 million years ago, most of those lifeforms were thought to have gone extinct. Some paleobiologists hold that Earth's first mass extinction actually took place during this period, when newly evolved animals transformed the environment.

Biota from the Ediacaran period through the Cambrian explosion. (Proceedings of the Royal Academy; B M. Gabriela Mángano, Luis A. Buatois)

Hoyal Cuthill says that her research leads her to a very different view: that there was a broad but not mass extinction, and that Ediacaran animals survived well after the Cambrian Explosion.

And in the journal paper published this week, Hoyal Cuthill and co-author Jian Han of Northwest University in Xian present fossil evidence from southern China of Cambrian creatures that she argues are unquestionably animal.

She said they have characteristics such as radial symmetry, differentiated bodies and an animal type organization. These fossils date from the early Cambrian, she said, yet they are similar in important ways to creatures found during the earlier Ediacaran period.

In other words, this group of animals not only persisted from the onset of the Ediacaran period, but also after the often-invoked mass extinction that came along with the Cambrian Explosion. 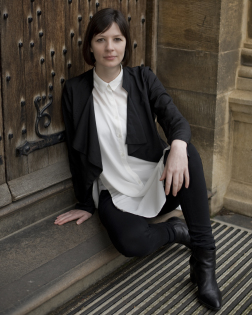 Hoyal Cuthill says that while the fossil record from the Ediacaran is sparse, flora and fauna are known to have included some of the oldest definite multicellular organisms. The organisms, she said, resembled fractal fronds but bear little resemblance to modern lifeforms.

The world's first ever burrowing animals also evolved in the Ediacaran, though we don't know what they looked like. The only fossils that have been found are of the burrows themselves, not the creatures that made them.

In an earlier paper, she described how and why many of the Ediacaran lifeforms got as large as they did.

"All organisms need nutrients simply to survive and grow, but nutrients can also dictate body size and shape.

"During the Proterozoic, there seem to have been major changes in the Earth's oceans which may have triggered this... growth to the macro-scale. These include increases in oxygen and, potentially, other nutrients such as organic carbon."

In other words, the surrounding atmosphere, oceans, perhaps reversing magnetic fields, tectonic and volcanic activity and the resulting menu of chemical compounds available and climatic conditions are essential drivers of biological evolution. Just as they are now considered some of the important indicators of a potentially habitable exoplanet.

And on a currently far more fanciful note, wouldn't it be wonderful if scientists could some day not only find life beyond Earth, but to learn to study how that life, too, might have evolved.