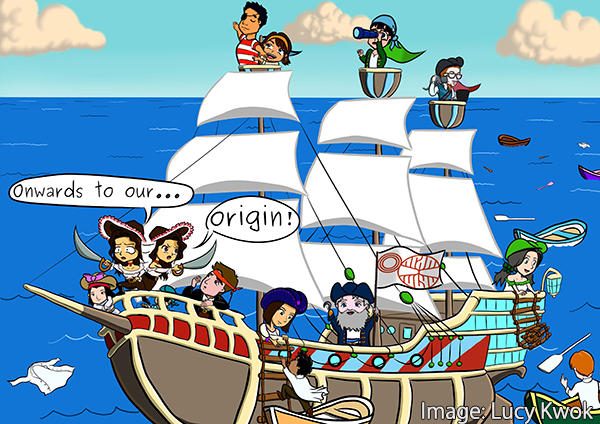 For months, John Hernlund shared his basement office with a noisy computer server and a heaving door. "The room was small, ugly and cramped," says the Earth and planetary scientist. "The entire building would shake every time someone went out the door." His dozen or so colleagues at the Earth-Life Science Institute (ELSI) worked in similarly cramped confines scattered across the Tokyo Institute of Technology campus. Being isolated, Hernlund was always happy when they dropped by.

In the summer of 2013, Hernlund, his wife Christine Houser, and their one-year-old daughter flew halfway around the world to work at ELSI. The couple were leaving behind research positions at the University of California, but they were drawn to Japan by a newly established institute that hoped to uncover the Earth's deepest secrets about the origins of life. This journey began with an invitation from Kei Hirose, future director of ELSI, to be a part of an exciting new institute in Japan during the proposal writing phase in early 2012. ELSI is one of nine interdisciplinary institutes set up with ten-year grants from the Japanese government's World Premier International Research Center Initiative. The institute was established in December 2012.

Three years later, in October 2015, ELSI welcomed visitors to a bright and spacious new building perched above the university's southern entrance. "It looks like a giant ship," says Houser -- a fitting analogy for what ELSI hopes to achieve. "In a typical science department, everybody navigates their own little research boats in whatever direction they please," she explains. "But at ELSI, we are asking people to break down their boats and join us in building a bigger and better boat that will take us to scientific places that none of us knew existed or even imagined."

"A lot of people are very optimistic and excited to see a new institute like ELSI arise, especially in an era when pure science isn't growing," adds Hernlund. "The new building is a reflection of the investment, hope and thought put into the ELSI enterprise." 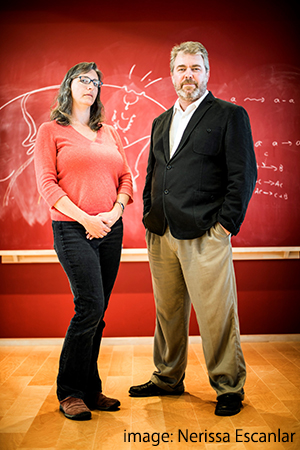 Hernlund's new office has silent sliding doors, high ceilings and plenty of light. He still bumps into his colleagues in the central hallway, but that is by design. A royal red carpet zigzags the length of the building near Hernlund's new office. At one end of the corridor is a peaceful tatami (Japanese straw mat) room with sunken floors, while at the other end Mount Fuji is visible on a clear day. The walkway looks down into a large, central hall called the Agora, which means gathering place in ancient Greek.

From a handful of individuals, ELSI has grown to accommodate 70 researchers, nearly half of whom are non-Japanese. Its network extends across the globe, and includes the NASA Astrobiology Institute, Harvard University, the Institute for Advanced Study in Princeton, and the Japan Aerospace Exploration Agency. In 2015, ELSI and the National Institutes of Natural Sciences established the Japan AstroBiology Consortium to promote the study of terrestrial and extraterrestrial life in the country. And it was recently awarded a major, US$5.6 million grant to link with a wider extended family of researchers and institutes through a global platform named the ELSI Origins Network.

"One of our greatest achievements has been to reassure people from outside Japan that ELSI is different from typical Japanese departments," says Hernlund. The working language is English, a non-hierarchical environment gives researchers complete freedom and autonomy, and dedicated support staff facilitate a smooth transition to the island nation for those relocating from abroad.

Hernlund and Houser were among those who benefited from the help of ELSI staff members. They sorted out certificates of employment and visas and assisted the couple to find a house and day care for their daughter. "Japan is a really great place to be a parent," says Houser, referring to the affordable healthcare and good-quality day care subsidized by the government. "Its equivalent does not exist in the United States."

ELSI also provides its staff with twice-weekly Japanese lessons. "I feel safe in Japan," says Houser. "I love being able to walk around at any time of day or night. Tokyo offers an endless landscape for urban explorers like myself." 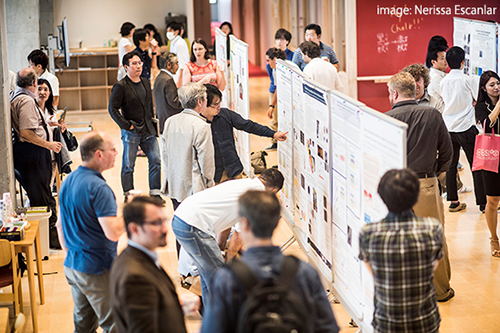 Soon after arriving at ELSI, Hernlund and his colleagues initiated a major reorganization campaign called ELSI 2.0 to improve transparency, limit bureaucracy and establish harmony. They interviewed every individual in the institute, from researchers to administration, secretarial and public relations staff, and began to redefine roles. All three vice-directors, including Hernlund, were assigned more of the administrative burden of the institute. "Many things had been drifting, and nobody was taking care of them until they became an emergency," says Hernlund. "We were putting out fires all the time." The reorganization also separated the more traditionally minded administration staff from the public relations team and the secretaries, who provide research support. This allowed for more dynamic testing and implementation of new ways of working.

ELSI set out to establish a global presence, hosting numerous workshops, a high-profile annual symposium and a major recruitment drive. "Foreigners attract more foreigners," says director Hirose. In the last international recruitment campaign, more than 90 per cent of applications came from abroad. Job offers are rarely rejected. Looking ahead, Hirose has established a fundraising committee and plans to set up a donation office in the United States to source new funding before the government lifeline is phased out in March 2022.

Vice-Director Shigeru Ida was one of the first researchers to move to ELSI from the Department of Earth and Planetary Sciences at Tokyo Institute of Technology. He has witnessed first-hand how the working culture dramatically changes when non-Japanese staff are not viewed as short-term visitors but as long-term partners who participate in management and administration. "In traditional Japanese business meetings, for example, people are constantly trying to read each other's opinions," says Ida. "But in most parts of the West, people speak out in a very direct way."

Japanese universities tend to have a homogenous faculty and student body, he adds. Closer contact with people who speak the language of international science -- English -- will help to raise their research profile. "When an international institution like ELSI is formed, the effects propagate throughout the university."

The president of Tokyo Institute of Technology, Yoshinao Mishima, agrees. "Researchers and administrative staff are learning from ELSI how to operate such interdisciplinary and internationalized research labs. We have never experienced anything like this before."

The origin of life on Earth is inextricably bound to the history of the planet. Life emerged in geological terms not long after the Earth was formed. Yet life scientists and planetary scientists rarely share the same roof. "ELSI is the only institute in the world chartered to provide a stable long-term community where these people can work together," says Eric Smith, a theoretical physicist who has spent more than two decades collaborating with biologists, biochemists and geochemists in search of the first signs of self-organizing life forms.

"Everything in science gets stuck if all you have is yourself," says Smith. "You have to have a community of people to surprise you. And that element of surprise is what ELSI can try to provide for people."

Researchers give each other cross-disciplinary grounding in basic concepts through interactive 'kindergarten' sessions open to everyone including research support staff. Earth and planetary scientists discuss breaking ideas in informal and inclusive 'deep thoughts' sessions about the 'deep Earth'. "ELSI's job is to create a community capable of discovering good ideas that don't exist. Its success is going to turn on that," says Smith.

Houser is already beginning to see a shift in the kinds of questions she asks. Her research involves using seismic waves that travel deep into the Earth to create a three-dimensional map of its internal structure -- "kind of like a magnetic resonance image of the brain." But soon after joining ELSI, Houser realized that these deep rocks could be remnants of ancient material from the time of Earth's formation, billions of years ago, and could give clues about what the early Earth environment was like. "They take us back in time."

Researchers still do not know if the Earth is storing or losing water with time -- a fundamental question that scientists at ELSI are trying to answer. Could water be trapped in deep reservoirs 400 to 700 kilometres underground between the upper and lower mantles? Houser's recent seismic analysis suggests an absence of water in this transition zone, but experiments by researchers at an ELSI satellite center in southern Japan, Ehime University, imply there should be. "Sharing the same roof and the same goals gives us the motivation to work towards a common understanding rather than just agreeing to disagree," says Houser.

But while most researchers enjoy learning from their colleagues, establishing areas of mutual interest for further scientific collaboration is challenging. Tomohiro Mochizuki is one of seven biologists at ELSI, and the only virologist. His research involves visiting hundreds of hot springs around the world in a hunt for RNA viruses that can thrive at near-boiling temperatures. "A lot of people believe that the origins of life started from an RNA world in a thermal world, but no RNA viruses have so far been found in such environments."

More generally, Mochizuki is investigating the diversity of viruses that infect single-celled micro-organisms from the archaea kingdom. Compared with viruses that infect bacteria, archaeal viruses have a much wider morphological and genetic diversity, though only several dozen have been found. Mochizuki has previously discovered a coil-shaped archaeal virus with single-stranded DNA surviving at 90-95 degrees Celsius in a hot spring at the southern tip of Japan. All other cells and viruses found in such temperatures had double-stranded DNA genomes.

Like many of his colleagues, Mochizuki did not find the transition to ELSI easy. As the only representative of his field, he first had to set up all the equipment in his laboratory, from glassware to incubators. "You have to take care of everything on your own, which is a new experience for many young researchers here," says Mochizuki. "Slowly, by learning what is going on in other groups, I hope to develop fruitful collaborations with people from completely different backgrounds."

Hernlund admits that ELSI's transformation is not yet complete, but he's optimistic that it is not far off. "We are trying to bring people together to make intimate connections, culturally and scientifically, and the new building is the perfect home for this."