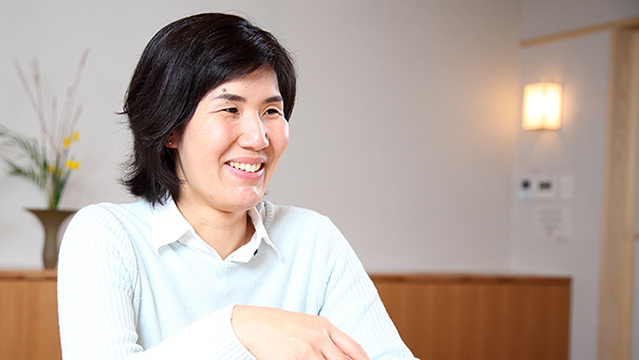 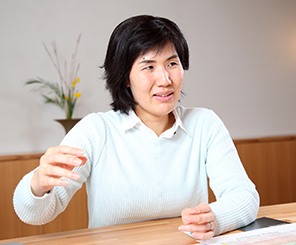 It can be clearly seen by images from satellite that the land at present time is covered with plants. However, no plant existed on land "just" several hundred millions years ago. So, when and how plants colonize on land? Sasaki is, to approach the mystery, giving full attention to "a creature" night and day.

Sasaki's current target of experiments is "Klebsormidium flaccidum" that belongs to Chorophyta division. The microorganism called "cyanobacteria" is the first creature that started photosynthesis in the water, and an "alga", as a eukaryote, was thought to be born by cohabitation of cyanobacteria with other microorganisms at one time. It can be assumed that when an aquatic "alga" evolves further, it obtains ability to survive on land to some extent and become an intermediate form between alga and land plant. Among plants of present-day, "alga" that belongs to Chorophyta division is the one that is equipped with such characteristics. A study group of Hiroyuki Ohta, KenKurokawa et al. in ELSI decoded the genome sequence of Klebsormidium flaccidum of Chorophyta division in order to reveal the process of evolution of gene during the transition from alga to land plant.

"Though Klebsormidium flaccidum is an alga with a simple-shaped long filamentous cells, it is equipped with minimum set of genes required for constructing a system in its genome such as phytohormone biosynthetic genes and genes to adapt to high-intensity light. Those are considered to be important for plants to colonize on land. We assume that the first plant adapted to the environment on land looked like Klebsormidium flaccidum."

It is said that it was about six hundred million years ago from now that the plant successfully colonize on land for the first time. The algae, ancestor of land plants, propagated by photosynthesis in shallow water, and was successfully adapted to the environment to survive on land since one time.

Searching for the Key to Environmental Adaptation

At present, the plants on the earth are adapting to a wide variety of environment such as middle of snow, and environment in tropic, highland, or desert. We can say that it is result of the fact that they have overcome various environmental stresses such as ultraviolet rays (UV) radiation, lights, drought, temperature change and so on. 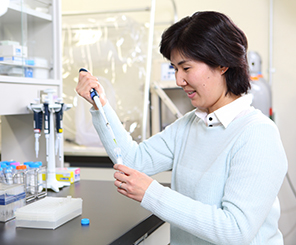 About six hundred millions of years ago when the first plant started to colonize on land for the first time, the land on the earth, that is lush green now, was an environment with little creatures that can be nutrient sources. In order to survive in such environment, the creatures that can generate nutrient by themselves like plants are absolutely advantageous. Moreover, there is no predator. Furthermore, there is full of sunlight, source of photosynthesis. It looks like a paradise for plants full of benefits. However, in reality, "environmental stress" that gives fatal injury to life forms was waiting for them. Now, how did they adapt to such environmental stresses and establish the lives on the land?

"We think the way to environmental adaptation taken by plants at the time when they colonize on land can be categorized into two aspects; "evolution of metabolism" and "enhancement of signal transduction". Plants have cell walls outside cell membrane, but at the time of colonization on land, they evolve the series of reaction (metabolism) that synthesize substances that protects cells from stresses such as UV, drought or temperature change resulting in reinforcing cell wall and its outside. Also, the system that transmit the signal such as "Beware of dangerous UV!" when it detect a part of cell is destroyed by environmental stress."

A Cell is mostly consists of water, and lipid that constitutes cell wall consists of hydrophilic parts and hydrophobic parts. Simply saying, the basic structure of a cell is the water covered by hydrophobic "membrane". Since the membrane is the part that directly exposed to stresses from outside of cell, reinforcement of outside of membrane like plants did is a form of evolution to fit in to environment. It can be assumed that the "membrane" has become complicated along with the evolution of life, and to put it the other way, it can be deduced that the very timing when the basic structure of cell was formed might be the origin of life.

Ideal Environment for Widening the View from Outside of Specialty Area 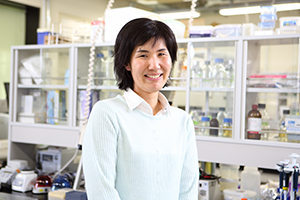 In ELSI, seminars or sessions by each study group are held on a daily basis. Sasaki, attending a study session to discuss a theme of establishment process of photosynthesis, says it is pretty exciting.

"For example, in biology, when we discuss the background of the increase of Oxygen on the earth, they explain that the increase is primarily attributed to the vigorous photosynthesis of cyanobacteria. However, in geology, they explain that only the generation of Oxygen is not enough and insisted that Oxygen doesn't increase without influence of change of the environment of the earth. That having been said, I realized that, regarding the plant's colonization on land, I have not properly thought about the environment of the earth at that time."

Sasaki says that the true value of ELSI is that they can freely "change course" to a truth through obtaining unthinkable ideas of different area of specialty.

Sasaki, who is taking a close look at "algae" everyday to clarify the environmental adaptation system obtained in the course of colonization on land, expresses her true feeling that she want to go out for a field survey someday.

"It looks 'wild' to me that professors of geology often go to remote places in India or Africa. I have no chance to go at this time since the algae I study are living everywhere. But I want to give various thoughts to primitive microorganisms in a field survey. It will give me a hint to think of experiment system if I can grab an image such as, "It won't be able to overcome that severe environment unless it becomes a little tougher.""

She expects that the coevolution of the earth and life can be seen if she can face real environmental stresses by being away from a laboratory sometimes.