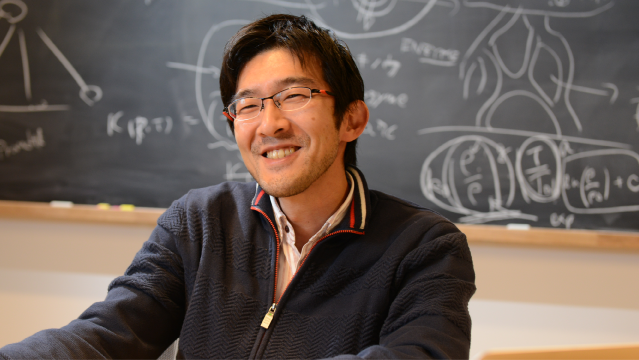 Approaching Mysteries of the Earth and Life from a Geological Viewpoint

Challenging to Reproduce the "Atmosphere of the Early Earth" 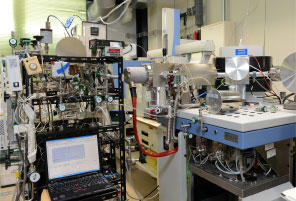 In the laboratory, many heavy apparatus stand close to each other. On the left hand side across the aisle, there is an apparatus equipped with thin tubes, and on the right hand side, a digital display can be seen.

"By letting the mixed gas sample go through this long tube, we can extract only targeted components from the sample. This is because the required time for a gas to go through the specially treated tube is different according to the kind of the gas. For example, the target gas we are trying to extract now is called Sulfur Hexafluoride (Chemical formula: SF6) which comes out from the tube at 4′30″ and so on."

The work that Ueno, who has a background in geology, is performing here is a part of the research to "read the atmospheric composition of the early earth". Though it was already revealed by geological records that the earth of more than 2,500 million years ago was warmer than the earth of today, it contradicts to the theoretical projection that the surface of the earth was freezing cold at that time since the sun at that time was more than 20% dimmer than that of today. However, it is said that this issue can be explained if it is demonstrated that the atmosphere of the early earth contained several orders of magnitude larger volume of greenhouse gases than that of the earth of today.

In recent years, many minerals contain anomalously concentrated sulfur with mass number of 33 have been discovered from the strata of more than 2,500 million years ago, and the stable isotope of sulfur is getting much attention as a estimation method for the early atmosphere. It was known that the anomalous isotopic concentration is caused by UV-induced photochemical reaction in the atmosphere. What Ueno is trying to do is to precisely reproduce the isotopic anomaly recorded in geological samples through experiments. If they find out the environmental conditions that can reproduce the anomaly, it therefore indicates that it was the environment of the early earth. 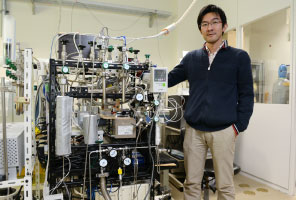 Ueno, like other researchers of ELSI, commits to a wide range of areas. However, in the earth as well as in life, there is a common basic viewpoint. It is "identification of field".

"From the viewpoint of "the earth", it means identifying the environment of the early earth such as the atmosphere and ocean. From the viewpoint of my own field, geology, <approaching backward>, in other words, research from the past having geological records, is one of my research style."

Regarding another viewpoint "life", focus is on "now" instead of going back to the past. Though it seems contradictory, the reasons can be explained as follows.

Now, there are some spots on the earth that seem to have environment similar to the one at the time of appearance of life. For example, as announced in the press release on 23rd January this year, the group of ELSI, Naohiro Yoshida, Shigenori Maruyama, Akira Kurokawa, and Ueno et al has found out that the hot spring water of Hakuba district in Nagano prefecture contains inorganically synthesized methane gas. *1 This hot spring water was generated from reaction of a special rock called serpentinite and water. It exhibits strong alkaline condition and has high hydrogen concentration, which can rarely be seen on the earth. However, it is considered to be an ordinary environment on the early earth. This kind of style, such as looking for such special places around the world and finding out the processes that led to creation of life in natural environment, is the research method of Ueno et al for creation of life on the earth.

"Even today, there are still some places that have similar environment of the early earth. I believe a part of the processes that created organisms must be happening there even today. If there is actually a similar environment, it would make our research easier to go there and learn at the site, like "Well, this kind of thing is also happening!" That is our way of thinking." 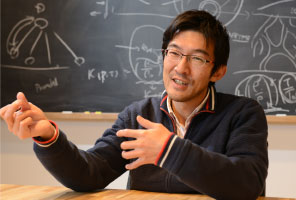 Besides the above two viewpoints, i.e. "Reading the earth's environment" and "Seeing the environment at the time of creation of life at site", Ueno is working on another research that exactly covers the crossover of those two areas.

In the history of the earth, the period from 2,500 million to 4,000 million years ago is called "Archean Era", when there were only a few continents. From the organics accumulated in the bottom of the ocean at the era, actual conditions of the early life might be found out. Ueno specially focuses on the sea-floor hydrothermal deposit of 3,500 million years ago, and is investigating what kind of environment it was and what kinds of organics were there.

"Western Australia, where there are our target samples (rocks), has become land now, but it is assumed that it used to be the bottom of 1,000m-depth sea where hydrothermal activities was active. It was already revealed that the samples actually contain organics. We think it is possible to regenerate the reaction processes that actually led to the creation of life in the early earth by conducting experiments of synthesizing organics in a laboratory under the same condition of the hydrothermal environment restored from the information of the strata at that time. Important thing in this method is that we can verify if the organism is identical with the one created on the early earth by comparing it with the one remained in the strata."

We are working on the reconstruction of the atmosphere of the early earth and organic synthesis processes in hydrothermal environment. When the results of those researches fully appear, we are sure to make one big step closer to unravel mysteries of creation of life.