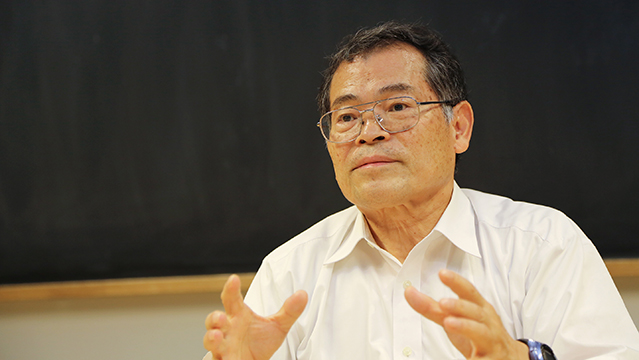 Let’s Plunge into Unexplored World with Experience and Courage 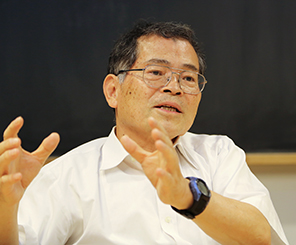 "On December 7th 2012, the Earth-Life Science Institute (ELSI) was opened for the purpose of commencing research on the origin of life. Since its establishment till now, I believe that the most important point in our research is the fact "The Earth is where life was actually created." It is definitely not easy to find a better place than the Earth as a planet that meets the conditions for creation of life. More important thing is we should pay first attention to the Earth where life actually exists as it is now. That's our starting point."

Maruyama said flatly without changing the gentle expression on his face. There are ocean and land on the planet Earth. There is moderate gravity since it has enough mass. The air covering its land surface is thin enough to be easily affected by solar energy and causes changes in weather. The Earth is a planet that adequately meets various conditions in which life can exist.

Maruyama has published more than 280 papers of geology and petrology on international journals in the past. He presented a new direction of geophysics after 1990 by plume tectonics focusing on the large-scale convection flow in mantle. While leading researches on geophysics, he has been interested in fields outside of his expertise such as global warming issues and paid a lot of attention from the world as an opinion leader for his active introduction of his own theory. "Searching for the origin of life by interdisciplinary way" is what Maruyama is putting his great effort as a culmination of his own researches.

Numerous numbers of researches trying to "produce life" have been conducted since long time ago, and various results have been presented by biologists. However, according to Maruyama, most of the results of those researches were based on observation of the reactions in test tubes, and moreover, they just vaguely imagined with a hope that life would be produced over time if they only put elements of Carbon (C), Hydrogen (H), Oxygen (O) and Nitrogen (N) which compose 80% to 90% of organism together in one place.

"It is true that C, H, O, and N are essential for vital activities. O and H turn into water, and C and N turn into air. However, in fact, some important elements for life support are missing. They are chemical elements such as phosphorus or potassium. But, since these elements are contained only in "rocks", they cannot be taken as they are. Rocks are broken by rain on land surface and carried away by river water and arrive at ocean. Rocks are broken into small pieces during the process and finally can be consumed after dissolved in water as ions."

Maruyama has named the environment, where these three essential elements for vital activities, i.e., water, air, rock coexist and material circulation continues under the sun, as "Habitable Trinity" and he put it on foundation of his researches. 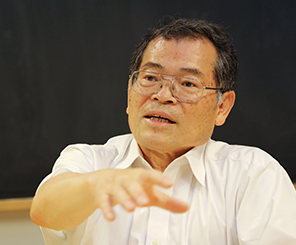 We understood that three elements, i.e., "water" "air" and "rock" are essential for vital activities, but a little more detailed explanation is required for explaining how special the existence of the Earth is.

Ocean at present day has about 3,800m depth in average. But, if the surface of ocean were 10,000m higher, lands would disappear from the Earth. If the Earth were covered only by ocean, rain could not break rocks and it would be impossible to feed consumable nutrients. However, the Earth has ocean and land. Moreover, there are hundreds of kinds of rocks on land and actually more than 10,000 different surface layer environments still exist even now. It means that, if every condition could be put into a test tube, there are more than 10,000 experimental environments."

"Firstly, we create a 'field' C by combining test tube A and B, each of which has a different condition with the other. By comparing the C with past experimental data, we can define as 'This is produced in the field like this.' By producing complicated organics from simple organics like this, bottom-up type complicated synthesis reactions would be possible. Specifically, since there are more than tens of the most important reaction formulas, we try to reconstruct the environment on the surface of the primitive Earth based on them. This is our first big plan."

Research environment is already established. Also, above all, ELSI is confident that it is taking a closest position to the reconstruction of the "field" for the creation of life in the world. Maruyama prospects that if they only pile up the results of experiments, they can keep being on the front line of the research.

Microorganisms Living in the Environment Similar to the Time of Appearance of Life.

Nevertheless, it is also true that it "lacks sense of speed" only by bottom-up type experiments. Therefore, "top-down" approaches are also tried simultaneously.

Huge amount of rocks on the surface of the Earth immediately after the birth of the Earth has almost disappeared from the surface of the Earth at present. However, in Australia, Africa and other regions, there are some places still remained with an environment similar to the one at that time. There are about ten such locations in Japan too, and a research group of Maruyama et al found out in 2014 that, a hydrocarbon that is a base of life is being synthesized through inorganic chemical reactions at one of those places, a hot spring area in Hakuba region in Nagano prefecture. In fact, they have obtained one more great benefit.

"As a matter of fact, in the field where the physicochemical environment remains as it was at the time of appearance of life, microorganisms exist adapted to the environment. It was revealed by professor Kurokawa (Deputy Director of ELSI), a researcher of genome of microorganism, et al that there are unidentified special microorganisms in hot springs in Hakuba. Now, the genome analysis has already almost completed. From now, we will analyze the three definitions of life, or 'membrane', 'metabolism' and 'self-replication'. We believe that if we can lead the world in the 'half-artificial life experiment' using microorganism living in a environment similar to Hadean eon, we can get significant results."

Courage to Step into a Field Outside of Experties 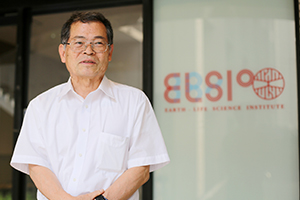 In order to advance research to explore the "origin of life" as the mission of ELSI, it is essential to have interdisciplinary point of view across the borders between fields such as astronomy, planetary science, geology, biology, chemistry and so on. Finally, we asked Maruyama a question about what kind of mindset is necessary for each member in doing research to achieve a goal that nobody has ever reached before in ELSI, a group of experienced top specialists in their own field.

"It's easy just to say the word 'interdisciplinary research', but in reality, it's hard to realize it. So, stepping into it with courage, in other words, a viewpoint of "interdisciplinary research by myself", is very important. For example, imagine I step into a field outside of my expertise and write a thesis. Nothing is going well without this kind of spirit. More importantly, it is impossible to achieve a goal unless everyone, not one of them, has this kind of feeling. In other words, it's time to go forward since almost nobody has ever succeeded before. I believe all of us can be as one if we have this kind of courage."