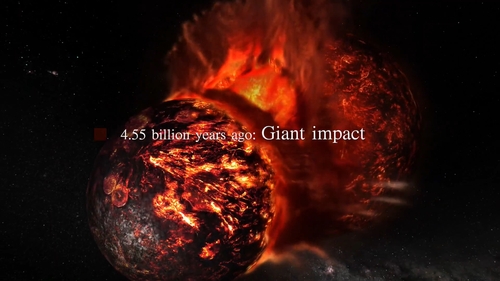 The Hadean Bioscience project (2014-2019)--supported by KAKENHI (Grants-in-Aid for Scientific Research on Innovative Areas) by the Ministry of Education, Culture, Sports, Science and Technology--has been engaged in research to answer what has been a fundamental question: how to elucidate the origin of the Earth and life. Through this project, Professor Shigenori Maruyama--PI of ELSI, Tokyo Institute of Technology-and Professor Ken Kurokawa of the National Institute of Genetics led the team to propose new hypotheses about the origin and evolution of life, including the birthplace of life on the Hadean Earth, that could reverse conventional theories. To introduce these new hypotheses and theories in an easy-to-understand manner, the Hadean Bioscience project team collaborated with CG creator, Mr. Hiromitsu Kohsaka (LiVE Company Ltd.) to produce a series of movies called "The Whole History of the Earth and Life".

The movie "The Whole History of the Earth and Life" consists of 12 chapters, and it will be possible to view the entire series with this release. It shares the latest research results and the history of the earth and life that the new hypotheses reveal, including the birth of the Earth, the birth of life, the evolution leading to the emergence of humans, and the future of the Earth.