Animation: This animation shows the process in which the giant impact causes a large amount of material to be ejected from the proto Earth. Credit: Natsuki Hosono, Hirotaka Nakayama and 4D2U project.

How and when the Moon formed is still under debate. The giant impact hypothesis is the most widely accepted theory and assumes a mars-sized small planet impacted proto-Earth and triggered the formation of the current Moon. If it is possible to form the Moon which is composed of materials from the surface of proto-Earth, this will support the fact that the isotope ratios of the Apollo samples are almost identical to those of Earth's rock. However, the early modeling of giant impact simulations could not reproduce the Moon with the majority of its mass coming from the Earth. This is the so-called isotropic crisis.

Figure 1. Simulation of a giant impact. In this case, the surface of the proto-Earth is covered with a magma ocean. Red, orange, blue and gray colored points represent the magma ocean, mantle of the proto-Earth, that of the impactor, and iron cores, respectively. Credit: Natsuki et al, 2019

Here, they considered the situation in which the early Earth was covered with a magma ocean (liquid phase SiO2) and, for the first time, carried out giant impact simulations (Figure 1 and animation). Their simulations show that the material of the magma ocean could be the primary source of the Moon-forming disk, unlike the canonical model (Figures 2 and 3). The presence of the magma ocean on the proto-Earth is an important key ingredient to solve the isotropic crisis in the giant impact hypothesis.

Figure 2. Time evolution of the mass components of the Moon-forming disk as a function of time. The colors are the same as those of figure 1. Natsuki et al, 2019 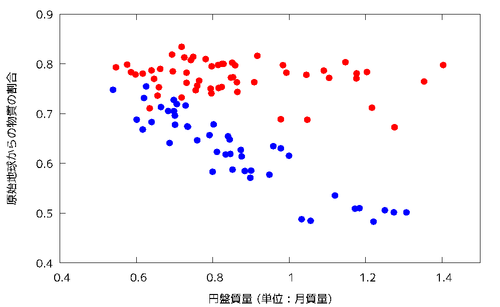 While the presence of the magma ocean during Earth's evolution is currently a widely accepted idea, it has never been taken into consideration in giant impact simulations. This is because there is no good model of the magma ocean (say, equation of state) that is suitable to use in numerical simulations. Here they develop it and adopt a novel numerical scheme of hydrodynamics (DISPH) and a framework, which assists in the development of the particle simulator for the massively parallel environment (FDPS).