Possible early life on Mars through an impact-generated hydrogen atmosphere? 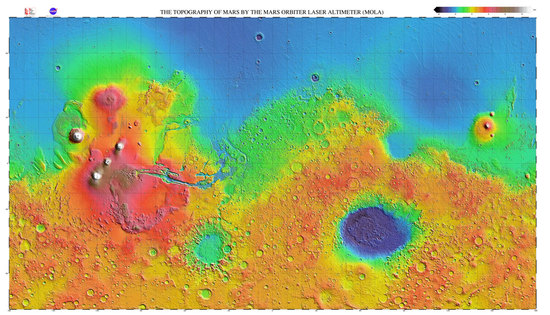 Figure 1: Flat Topography map of Mars shows clear dichotomy (Northernlowland (blue) and South highland (red)). Such difference in elevation and crustal thickness between the Northern and Southern hemisphere of Mars has been proposed to have been formed by a single giant impact that occurred within the first hundred million years after Mars' formation (Credit: NASA).

●Mars suffered a giant impact with Nerio (~1000 km diameter object) at 4.48 Ga
●This impact produced a 3 bar H2 atmosphere which lasted for less than 20 Myr
●It is more difficult for Mars to generate an early biosphere than Earth after a giant impact

Why is a hydrogen (H2) atmosphere important?

Humanity has always been curious about whether life exists or has ever existed on Mars. Previous studies by the authors have indicated that a H2 atmosphere could have formed on Earth that lasted for 100 Myr after a giant impact. This assists the emergence of life because (1) H2 is a greenhouse gas that could have kept the surface water in liquid form, (2) H2 could provide a reducing environment to kickstart pre-biotic chemistry, such as the formation of RNA. Here the authors study whether such a long-lived H2 atmosphere could have also existed on the surface of Mars.

How much H2 formed after a giant impact on Mars?

Given that the geochemical data from martian meteorites imply that Mars could have suffered a giant impact with a Ceres-sized body (~1000 km diameter, dubbed Nerio) 4.48 billion years ago, the authors studied whether a long lived H2 atmosphere could have also existed on Mars. Through performing different sets of Smoothed-Particle Hydrodynamics (SPH) simulations, they found that after the giant impact about half of Nerio's iron core became fragmented into mm-size droplets and rained onto the martian surface, eventually entering the martian mantle (Fig 1). According to noble gas isotopic data from martian meteorites and the martian atmosphere, early Mars could have had a surface water reservoir before the giant impact. If global surface water existed on Mars, the fragmented iron delivered by Nerio could be oxidised by water on the martian surface, forming about 3 bar of H2 through reactions between iron fragments and water (Fig 2).

How long did H2 last on Mars?

H2 is light and thus very easily escapes from Mars' surface. This H2 atmosphere can only survive for less than 20 Myr under the active young Sun, which is much shorter than the one created by a similar impact on Earth.

Implication for the origin of life on Mars

The results may imply that Mars has more difficulty producing an early biosphere after a giant impact than Earth does. Future interdisciplinary studies including atmospheric dynamics, geochemistry and biochemistry are required to further examine the fate of this impact-generated H2 atmosphere and its relation to the origin of life.

Figure 2. Snapshots of the SPH Simulation of the giant impact between Mars (larger body) and Nerio (smaller body). Both objects consist of an iron core enveloped by a mantle layer. After the giant impact, most of Nerio's core is fragmented into metre-sized particles (yellow). Some of them are then temporarily ejected from the martian surface and re-accreted globally back onto the whole surface. Eventually, about half of the fragments are further torn apart into mm-sized particles and enter the martian mantle (yellow particles finally embedded within the blue region).

Figure 3. Graphical illustration of the late giant impact on Mars. (1) Before the giant impact, a surface water reservoir could have existed on Mars. (2) Giant impact between Nerio and Mars occurred at 4.48 billion years ago. (3) Fragments from Nerio's iron core temporarily ejected from the martian surface, then re-accreted globally back onto the surface. (4) Fragments that re-accreted back to Mars could react with the surface water reservoir, forming a thick H2 atmosphere that survived for less than 20 Myr.