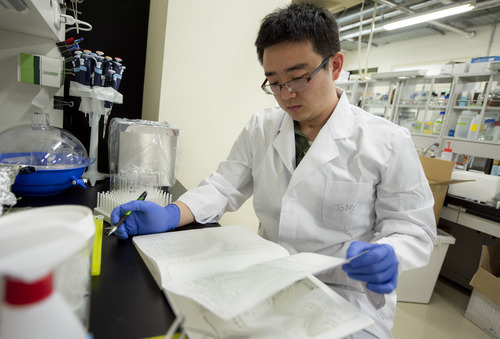 A team of scientists from the Earth-Life Science Institute have discovered that simple organic compounds like glycolic and lactic acid polymerize and self-assemble into cell-sized droplets when dried and rewetted, as might have happened along primitive beaches and drying puddles.
Credit: Nerissa Escanlar, ELSI

Before life began on Earth, the environment likely contained a massive number of chemicals that reacted with each other more or less randomly, and it is unclear how things as complex as cells could have emerged from such chemical chaos. Now, a team led by Tony Z. Jia of the Earth-Life Science Institute (ELSI) at the Tokyo Institute of Technology and Kuhan Chandru of the National University of Malaysia, has shown that simple α-hydroxy acids, like glycolic and lactic acid (which is used in common store-bought facial peels), spontaneously polymerize and self-assemble into polyester microdroplets when dried at moderate temperatures followed by rehydration, as might have happened along primitive beaches and river banks or in drying puddles. These form a new type of cell-like compartment which can trap and concentrate biomolecules like nucleic acids and proteins. These droplets, unlike most modern cells, are able to easily merge and reform and thus could have hosted versatile early genetic and metabolic systems potentially critical for the origins of life.

Scientists from around the world are actively working to understand how life began. All modern Earth life, from bacteria to humans, is made up of cells. Cells are comprised of lipids, proteins, and nucleic acids, with the lipid forming the cell membrane, an enclosure that keeps the other components together and interfaces with the environment, exchanging food and waste. How molecular assemblages as complex as cells originally formed remains a mystery.

Most origins of life research focuses on how the molecules and structures present in contemporary life were produced by the environment, and then assembled into structures that led to the first cells. However, there were likely many other types of molecules that formed alongside biomolecules on early Earth, and it is possible that life started using very simple chemistry unrelated to modern biomolecules then evolved through increasingly complex stages to give rise to the structures found in modern cells.

Previous work conducted at ELSI showed that moderate temperature drying of the simple organic compounds known as alpha-hydroxyacids, which are found in meteorites and many simulations of prebiological chemistry, spontaneously polymerizes them into mixtures of long polyesters. Building on this work, Jia and colleagues took the next step and examined these reactions under the microscope, and found that these mixed polyester systems form a gel phase and spontaneously self-assemble when rewetted to form simple cell-like structures.

The most challenging aspect of this work was devising new methods to characterize the droplets' properties and functions, as no one had analyzed such systems before. Jia noted that the team was fortunate to have such a diversity of multidisciplinary expertise including chemists, biochemists, materials scientists, and geologists. After determining their composition and showing their propensity to self-assemble, the next question was whether these cell-like structures might be able to do something chemically useful. Modern cell membranes perform many crucial functions that help maintain the cell; for example, retaining macromolecules and metabolites in one place, as well as providing a constant internal environment, which can be very different from the one outside the cell. They first measured how stable these structures were and found they could persist for very long periods depending on the environmental conditions, but could also be made to merge and coalesce.

They then tested the ability of these structures to sequester molecules from the environment and found they accumulated large dye molecules to a remarkable degree. They then showed that these droplets could also host RNA and protein molecules and still permit them to be functionally catalytic. Further, the team showed that the droplets could assist in the formation of a lipid layer on their surface, suggesting they could have helped scaffold protocell formation. 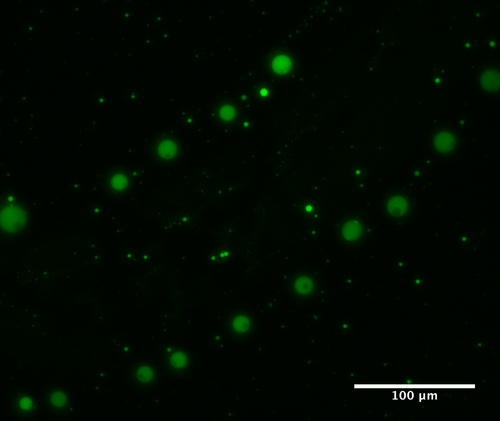 Jia and colleagues are not certain these structures are the direct ancestors of cells, but they think it is possible such droplets could have enabled the assembly of protocells on Earth. The new compartmentalization system they have found is extremely simple, they note, and could form easily in primitive environments throughout the Universe. Says Jia, "This allows us to imagine non-biological systems on early Earth that could have still had a hand in the origins of life on Earth. This suggests there may be many other non-biological systems that should be targets of future investigations of this type." He thinks the development of these or similar model systems could allow better study of the evolution of diverse chemical systems representative of the complex chemistries likely to be found on primitive planetary bodies.

"The early Earth was certainly a messy place chemically," Jia explains, "and often most origins of life studies focus on modern biomolecules under relatively "clean" conditions. Perhaps it is important to take these "messy" mixtures and see if there are interesting functions or structures that can arise from them spontaneously." The authors now think that by systematically increasing the chemical complexity of such systems, they will be able to observe how they evolve over time and possibly discover divergent and emergent properties.

"We have this new experimental system we can now play with, so we can start to study phenomena like evolution and evolvability of these droplets. The possible combinations of structures or functions these droplets might have are almost endless. If the physical rules that govern the formation of droplets are fairly universal in nature, then we hope to study similar systems to discover whether they also can form microdroplets with novel properties," adds Jia.

Finally, while the team is presently focused on understanding the origins of life they note this basic research could have applications in other areas, for example, drug delivery and personalized medicine. "This is just a wonderful example of the unexpected ways projects can develop when a team of diverse scientists from around the world come together to try and understand new and interesting phenomena," said team member Jim Cleaves, also of ELSI.